Virginia Hires Increased By 24,000 in July

RICHMOND— The Virginia Employment Commission announced today the U.S. Bureau of Labor Statistics’ July 2022 Job Openings and Labor Turnover Survey (JOLTS) reports Virginia job openings rose to a record-high 344,000. With hires increasing by 24,000 in July, Virginia had the largest increase in workers in the nation.

According to the most recent BLS JOLTS survey data, the estimated number of July hires nationwide was little changed in most states and only significantly increased in Virginia. BLS JOLTS data provides information on all pieces that go into the net change in the number of jobs. These components include job openings, hires, layoffs, voluntary quits, and other job separations (which includes retirements and worker deaths). Putting those components together reveals the overall change in payroll employment. JOLTS data is seasonally adjusted and describes conditions on the last business day of the month. Current month’s data are preliminary and the prior month’s data have been revised. 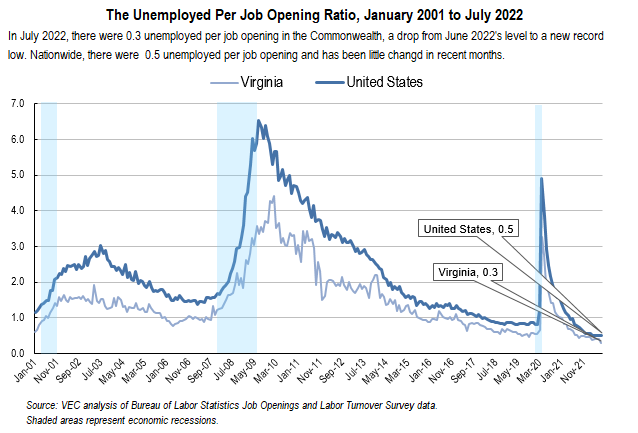 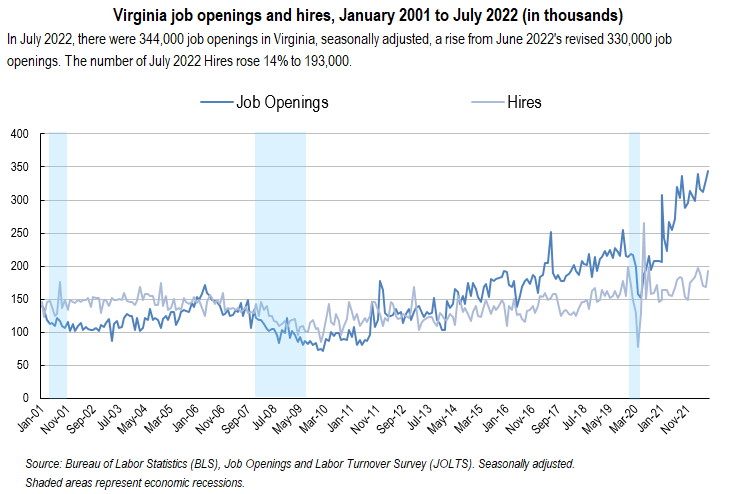 The number of hires in Virginia rose by 24,000 to 193,000 in July, which was nearly 8% greater over the year and a third higher than five years earlier. JOLTS defines hires as all additions to the payroll during the month. The series low of 77,000 was set in April 2020, while the high of 265,000 was set in June of that year. Nationwide, the number and rate of hires were little changed at 6.4 million and 4.2%, respectively. Hires were little changed in all industries. The hires rate significantly increased in establishments with 1,000 to 4,999 employees. In Virginia, the hires rate rose to 4.7% from June’s revised 4.2% rate. Across the nation in July, hires rates decreased in 4 states, increased in 1 state, and were little changed in 45 states and the District of Columbia.

An estimated 122,000 workers quit jobs from Virginia employers in July. The number of quits rose by 11,000 from June’s revised figure of 111,000 and was a quarter higher than a year earlier. However, it was down significantly from the record-breaking month of December 2021 when 131,000 Virginia workers quit their jobs. Quits, a component of total separations, are voluntary separations initiated by the employee. Across the U.S. in July, the number of quits was little changed at 4.2 million. Quits decreased in health care and social assistance (-73,000) and in state and local government education (-21,000). Quits increased in transportation, warehousing, and utilities (+39,000).  The number of quits can be seen as a leading indicator of wage trends in that it includes workers who quit to move to another job. 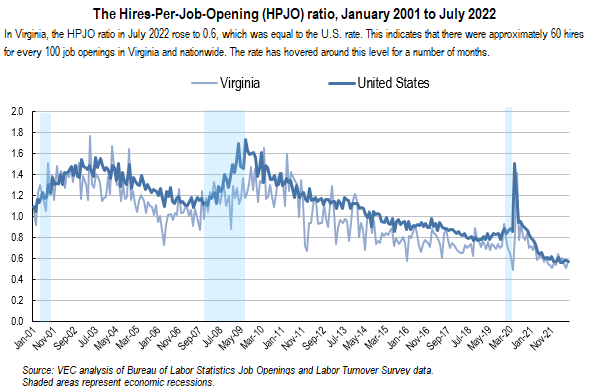 The hires-per-job-openings (HPJO) ratio was little-changed in July at around one hire for every two job openings in Virginia, equal to the 0.6 rate nationwide. This measure shows the rate of hiring compared to open jobs and is a proxy for time to fill positions. Over five years, the ability to hire for job openings has fallen by nearly a third nationwide and in the Commonwealth. 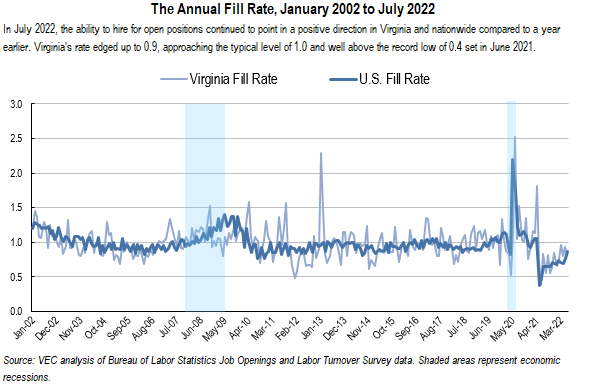 In July 2022, the ‘annual fill’ rate (the ratio of ‘this month’ hires to ’last month’ job openings, over the year) rebounded to 0.9 from the revised June’s figure of 0.8. The U.S. annual fill rate was little changed at 0.9. This indicates, in Virginia, a trend in recent month towards less difficulty in filling positions when compared to a year earlier. The fill rate is a measure used to evaluate how labor markets differ in the pace that job openings are filled. An annual fill rate near or above 1.0 can indicate that employers are growing more efficient at filling job openings. On the other hand, an annual fill rate of less than 1.0 can indicate a tighter labor market, with employers having greater difficulty filling job openings compared to a year earlier. 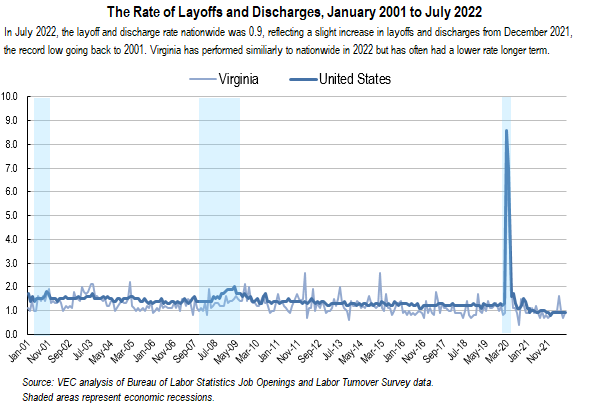 The July 2022 churn rate (the sum of the hires rate and the total separations rate) rose to 8.8 from June’s revised 8.0 rate in Virginia, indicating continued elevated velocity of movement into and out of jobs. Nationwide, the July 2022 churn rate was little changed over the month and lower than Virginia’s, indicating slightly slower velocity heading into the second half of 2022. An elevated churn rate indicates a labor market with a high hires rate, a high separations rate, or both. It can signify that workers are moving more frequently into and out of jobs in the labor market. Conversely, a low churn rate indicates a labor market with a low hires rate, a low separations rate, or both. Labor markets with the most churn may also have more seasonal employment patterns not fully captured by seasonal adjustment factors, which can lead to more frequent job-to-job movement. 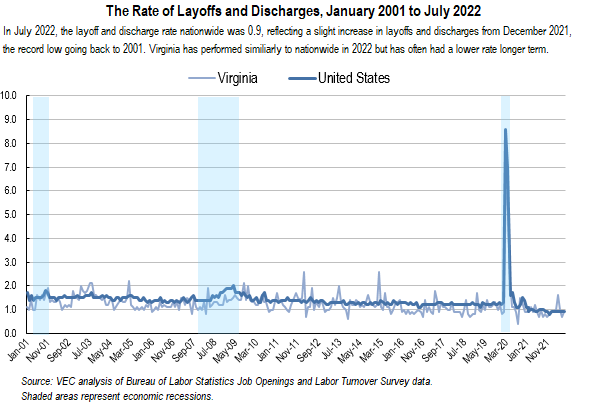 2022 JOLTS figures show yet another month of a hot job market in which workers were able to consider multiple options and employers were still eager to hire. This was evidenced in the number of workers quitting their jobs. In every month going back a year, at least 100,000 Virginia workers left their job if you count February’s 97,000 figure. This has never happened before, going back to 2001. Over 70% of total separations in July were quits and may be an indication of continued worker confidence in their chances to find a better job. At the same time, both hires and job openings continued to greatly exceed the number of quits nationwide, with Virginia hiring especially resilient in July. Many believe that the U.S. economy is slowing down, but hiring managers didn’t seem to agree. Employers have struggled to build back their staffs to where they want them. An explanation for this may be that, now that they have employees again, employers want to hold on to them, refraining from additional layoffs to hedge their bets to not have churn again, which is so costly.

The Virginia Employment Commission plans to release the August 2022 analysis of the BLS Job Openings and Labor Turnover Survey for Virginia on Monday, October 24, 2022. The data for all states and the U.S. will be available on the BLS website JOLTS page, at https://www.bls.gov/jlt/. BLS is scheduled to release the August JOLTS data for states on Wednesday, October 19, 2022.