Virginia Job Openings and Labor Turnover in April 2022 Decrease By 19,000

RICHMOND— According to the U.S. Bureau of Labor Statistics’ April 2022 Job Openings and Labor Turnover Survey (JOLTS), Virginia hiring rose 4.6% over the month to 206,000.

JOLTS data provides information on all pieces that go into the net change in the number of jobs. These components include job openings, hires, layoffs, voluntary quits, and other job separations (which includes retirements and worker deaths). Putting those components together reveals the overall change in payroll employment. JOLTS data is seasonally adjusted and describes conditions on the last business day of the month. Current month’s data are preliminary and the prior month’s data have been revised.

The number of April 2022 job openings in Virginia was a 19,000 decrease from March’s 2022’s revised figure of 340,000, which was a record high. The number of U.S. job openings fell by nearly a half of a million from March’s revised figure of 11.9 million, which also was the highest level in the history of the series which began in January 2001. Nationwide, job openings decreased in most industries with the largest percentage decreases in federal government, arts, entertainment and recreation and healthcare and social assistance. The largest percentage increase occurred in real estate, rental, and leasing and transportation, warehousing, and utilities. The Virginia job openings rate (job openings as a percentage of total employment) fell by 0.4 of a percentage point to 7.4% in April and was significantly lower than the series high of 7.9% set in September 2021. In April, the U.S. job openings rate decreased in establishments with 250 to 999 employees but increased in establishments with 1,000 to 4,999 employees. The largest significant decreases in job openings rates occurred in Pennsylvania (-1.9 percentage points) and Kentucky (-1.4 points), as well as Alaska and South Carolina (-1.3 points each). 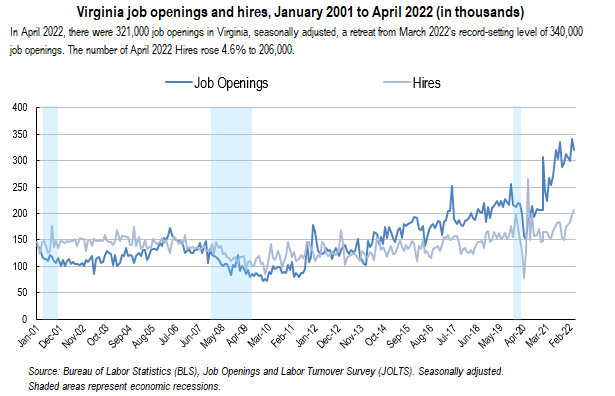 The number of hires in Virginia rose by 9,000 to 206,000 in April and was 50,000, or a third, higher than April 2021. JOLTS defines hires as all additions to the payroll during the month. The series low of 77,000 was set in April 2020, while the high of 265,000 was set in June of that year. Nationwide, the number of hires was little changed at 6.6 million, which was lower than its peak of 8.1 million set in May 2020. The largest percentage increases in U.S. hiring occurred in real estate, rental, and leasing, financial activities, and finance and insurance. State and local government posted the largest percentage fall over the month. Compared to April 2018, U.S. hires were up by one million, or 18%. In Virginia, the hires rate rose 0.2 of a percentage point over the month to 5.1%. The U.S. hires rate increased in establishments with 1 to 9 employees and in establishments with 5,000 or more employees but decreased in establishments with 50 to 249 employees. Significant decreases in hires rates occurred in Michigan (-0.8 percentage point), Arkansas (-0.7 point), and Pennsylvania (-0.5 point). Significant increases in hires rates occurred in Colorado (+0.8 percentage point) and in California (+0.4 point).

An estimated 114,000 workers quit jobs from Virginia employers in April. The number of quits rose by 9,000 from March’s revised figure of 105,000 but was ten percent lower than a year earlier. In addition, it was down significantly from the record-breaking month of December 2021 when 131,000 Virginia workers quit their jobs. Quits, a component of total separations, are voluntary separations initiated by the employee. Across the U.S. in April, the number of quits was little changed at 4.4 million. They increased by nearly 85% in real estate and rental and leasing over the month. Quits in financial activities rose by 27% while wholesale trade rose by 22%. The number of quits can be seen as a leading indicator of wage trends in that it includes workers who quit to move to another job.

The hires-per-job-openings (HPJO) ratio held steady at 0.6 in April in Virginia, roughly equal to the rate nationwide. This measure shows the rate of hiring compared to open jobs and is a proxy for time to fill positions. Over five years, the ability to hire for job openings has fallen by nearly a third nationwide but the decline has been less severe in Virginia. 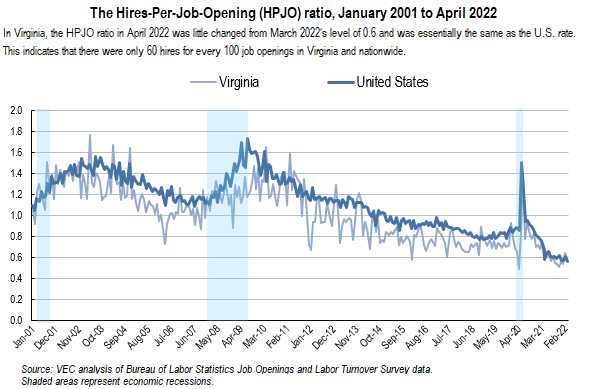 On the last business day of April 2022, there were 11.4 million job openings and 6.0 million unemployed people nationwide. This yielded a ratio of unemployed people to job openings of 0.5 for April, matching the record low set the previous month. The seasonally adjusted unemployment rate nationwide was much lower than in April 2021, declining from 6.0% to 3.6%. This, combined with many more job openings in most industries, indicated a growing imbalance between those measures of labor supply and demand. 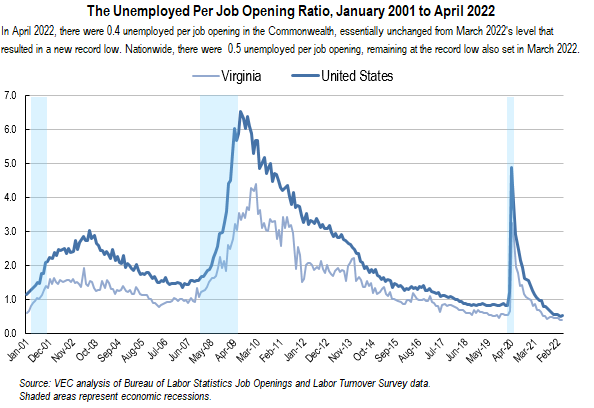 In April 2022, the ‘annual fill’ rate (the ratio of ‘this month’ hires to ’last month’ job openings, over the year) fell to 0.9 from the revised March figure of 1.0, the highest level since April 2021. The U.S. annual fill rate was little changed at 0.7. This indicates, in Virginia, a trend in recent month towards less difficulty in filling positions when compared to a year earlier. The fill rate is a measure used to evaluate how labor markets differ in the pace that job openings are filled. An annual fill rate near or above 1.0 can indicate that employers are growing more efficient at filling job openings. On the other hand, an annual fill rate of less than 1.0 can indicate a tighter labor market, with employers having greater difficulty filling job openings compared to a year earlier. 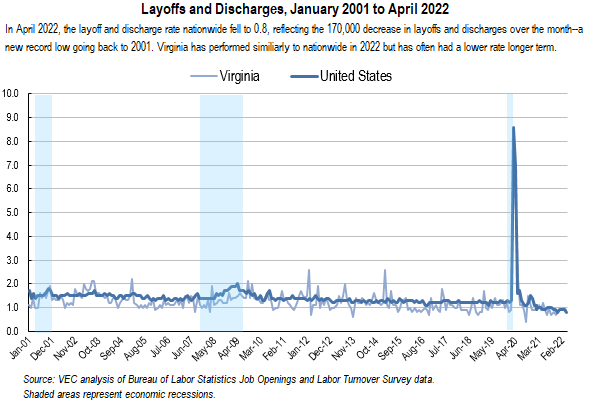 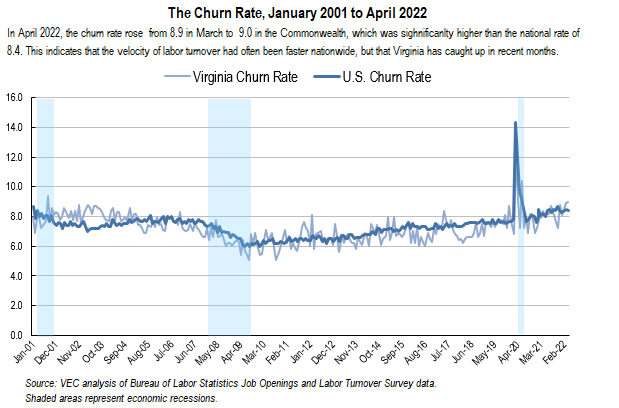 In April 2022, measures of Virginia job openings and labor turnover indicated that, despite a contracting economy during the first quarter of 2022, labor markets in the Commonwealth remained very tight. Driven by both layoffs and unemployment in the state at very low levels, the ratio of unemployed persons to job openings reached a record low. After March’s record-setting numbers of job openings in Virginia and nationwide, firms appeared reluctant to let staff go in April as the number of U.S. layoffs and discharges also reached a record low. With April 2022 hires a third larger than in April 2021, the ratio of hires per job opening matched its highest level in over a year, as the flurry of movement of Virginia workers between jobs continued.

The Virginia Employment Commission plans to release the May 2022 analysis of the BLS Job Openings and Labor Turnover Survey for Virginia on Friday, July 22, 2022. The data for all states and the U.S. will be available on the BLS website JOLTS page, at https://www.bls.gov/jlt/. BLS is scheduled to release the May JOLTS data for states on Wednesday, July 20, 2022.