~ Seasonally unadjusted weekly initial unemployment insurance claims declined by 9.9% from the previous filing week as continued claims fell by 6.5% during that period ~

RICHMOND—The Virginia Employment Commission (VEC) announced that the total number of initial claims filed from the beginning of the pandemic in Mid-March of 2020 through the August 29, 2020 filing week was greater than the combined totals filed during the ‘Great Recession’ in 2007-2009 and the economic recession in 2001.

For the filing week ending August 29, the figure for seasonally unadjusted initial claims in Virginia was 10,305. The latest claims figure was a decline of 1,131 claimants from the previous week, continuing the declining trend seen during August.

For the most recent filing week, continued weeks claimed totaled 233,467, which was a 6.5% decrease from the previous week, but 215,203 higher than the 18,264 continued claims from the comparable week last year. They also declined by 42.1% from their May 16, 2020 filing week peak of 403,557 claims. The continued claims total is mainly comprised of those recent initial claimants who continued to file for unemployment insurance benefits during the COVID-19 pandemic. 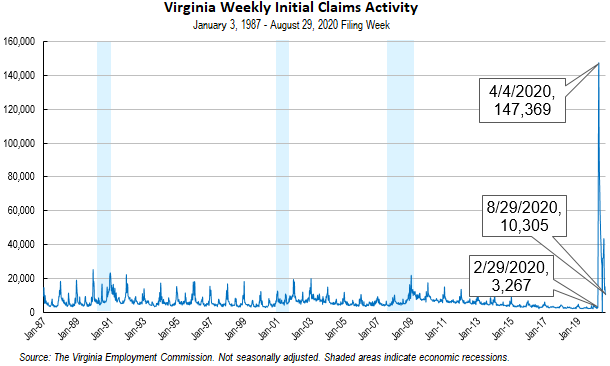 Nationwide, in the week ending August 29, the advance figure for seasonally adjusted initial claims was 881,000, a decrease of 130,000 from the previous week's revised level. The previous week's level was revised up by 5,000 from 1,006,000 to 1,011,000. The advance number of actual initial claims under state programs, unadjusted, totaled 833,352 in the week ending August 29, an increase of 7,591 (or 0.9 percent) from the previous week. There were 179,516 initial claims in the comparable week in 2019. Looking at preliminary data, most states reported decreases while a few states reported the majority of weekly increases on a seasonally unadjusted basis. California’s weekly change (+39,958) was the largest increase among states. Texas (+4,607) and Louisiana (+2,086) reported the next largest increases, which could have been influenced by Hurricane Laura. The number of Virginia preliminary claims reported (+197) was essentially unchanged from the previous week. 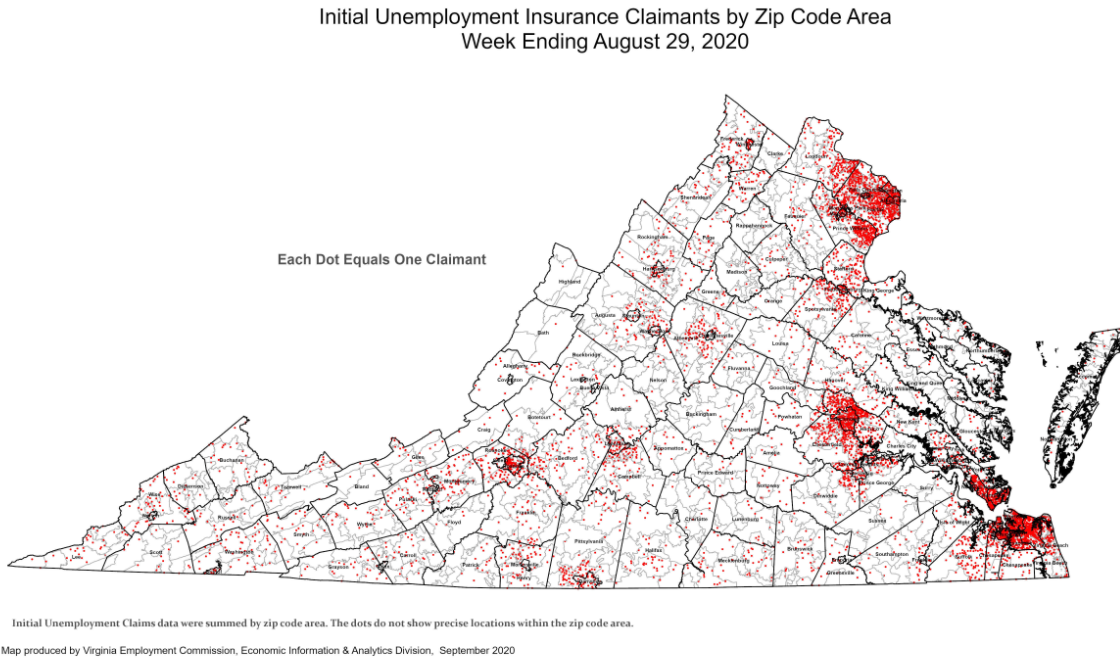 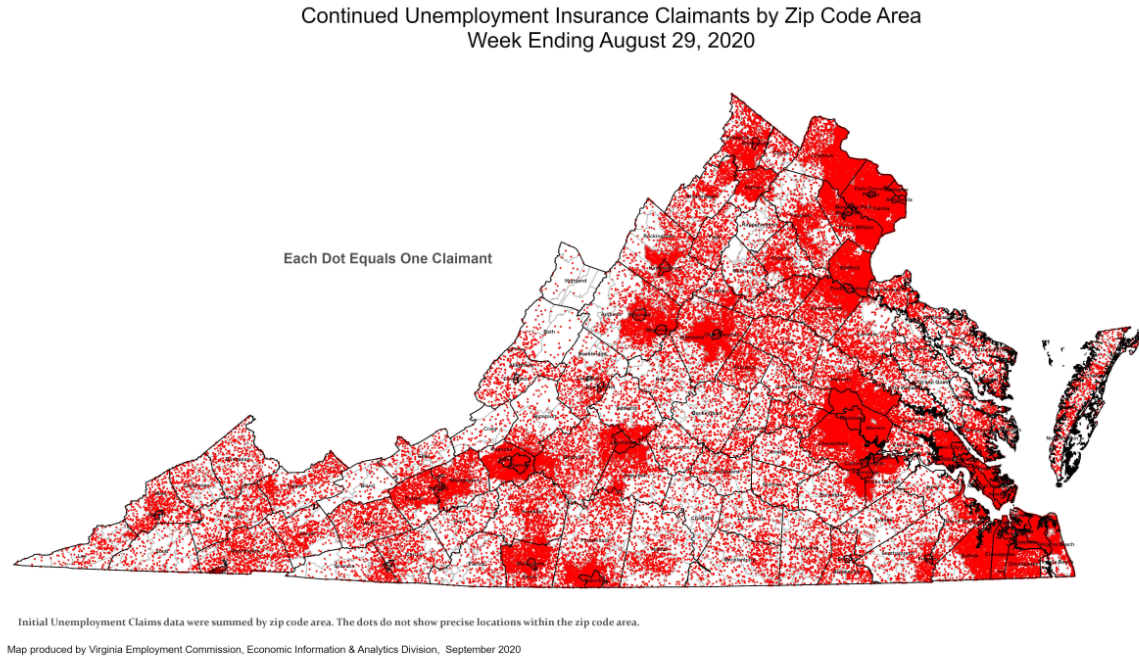 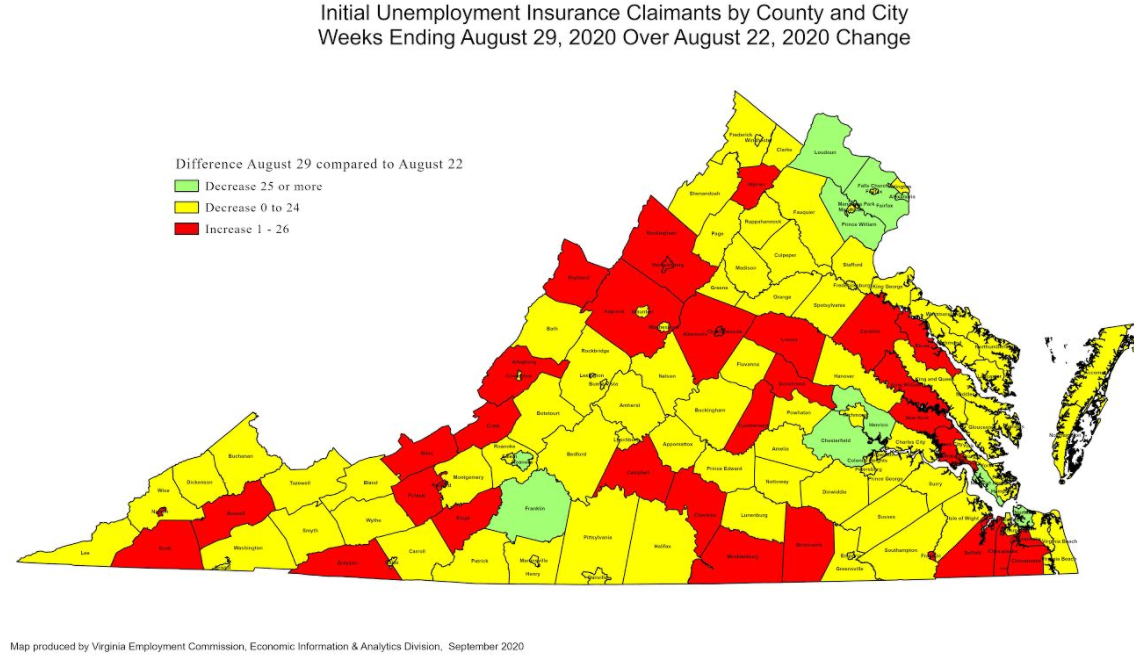 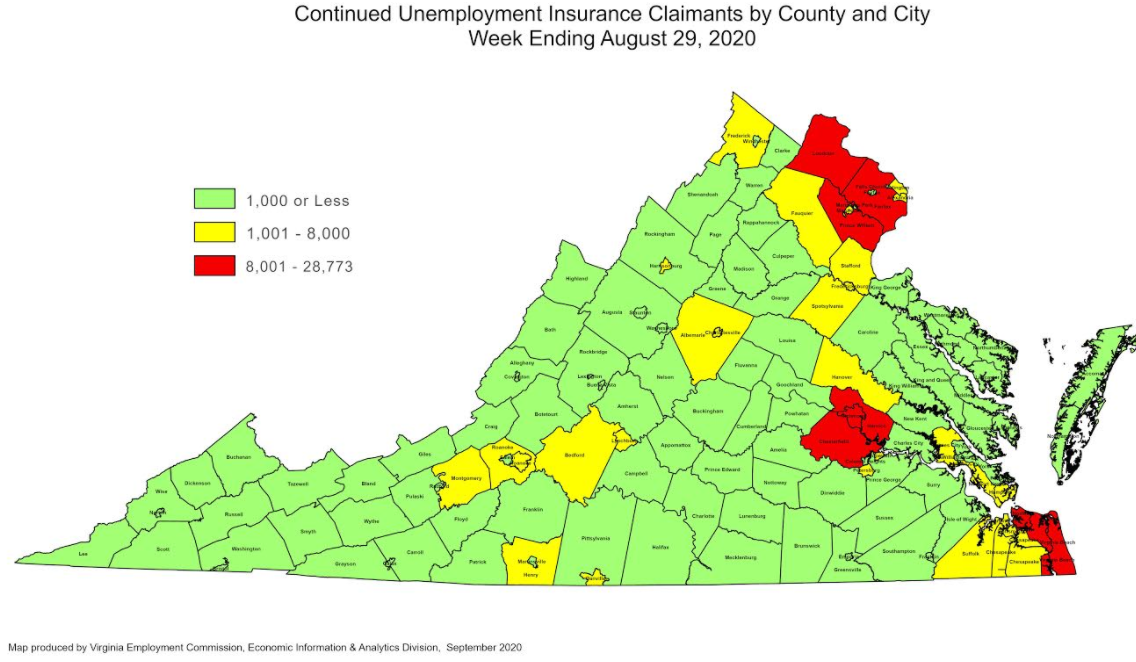