RICHMOND— According to the U.S. Bureau of Labor Statistics’ latest Job Openings and Labor Turnover Survey (JOLTS), in October 2021 there was a reduction of 28,000 job openings in the Commonwealth from September’s record-setting 336,000 figure, with 16% fewer Virginia hires

JOLTS data provides information on all pieces that go into the net change in the number of jobs. These components include job openings, hires, layoffs, voluntary quits, and other job separations (which includes retirements and worker deaths). Putting those components together reveals the overall change in payroll employment. JOLTS data is seasonally adjusted and describe conditions on the last business day of the month.

The number of hires in Virginia fell by 29,000 to 153,000, in October; the largest decrease in hires among states. JOLTS defines hires as all additions to the payroll during the month. The series low of 77,000 was set in April 2020, while the high of 265,000 was set in June of last year. Nationwide in October, the number of hires rose slightly to nearly 6.5 million. The U.S. hires rate (hires as a percentage of total industry employment) in October varied by industry and indicated that some industry sectors were doing relatively little hiring compared to the overall hiring rate for all industries. These were often white collar industries (government, financial activities, and educational services, for example). Elevated levels of hiring have been more prevalent in customer-facing, service sector jobs but also in construction. 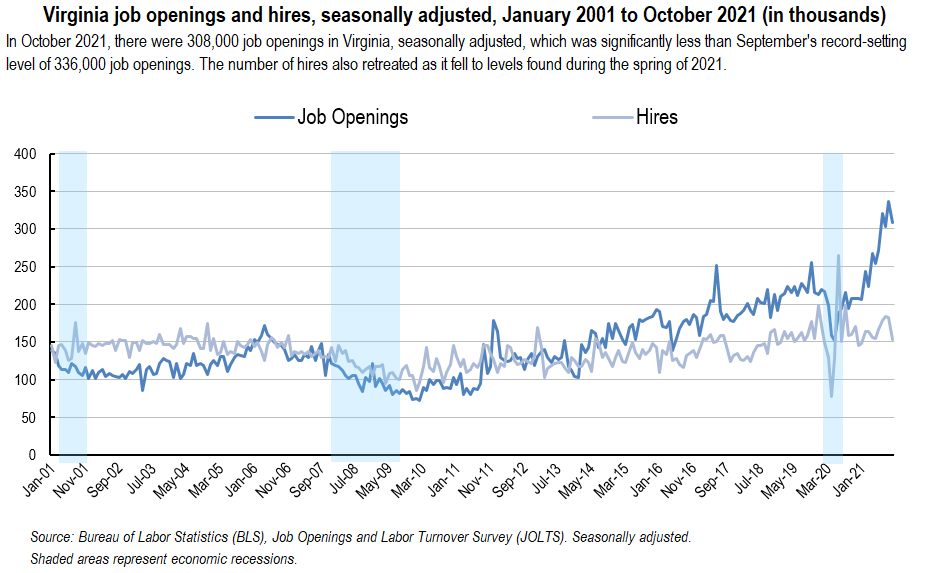 The number of quits in Virginia decreased by 7,000 to 108,000, which was 6% lower than in September but still elevated compared to historical trends. Quits, a component of total separations, are voluntary separations initiated by the employee. Across the U.S., the number of quits decreased by 205,000 in October to 4.2 million. This was down from a record of 4.4 million the month before. The previous all-time high represented the most people quitting since the United States began keeping records of the statistic about two decades ago and is equivalent to about 3% of the country’s labor force. The number of quits can be seen as a leading indicator of wage trends in that it includes workers who quit to move to another job.

The job openings rate and the quits rate remained elevated in October but both retreated from recent peak levels. The Virginia job openings rate (job openings as a percentage of total employment) fell by 0.7 of a percentage point to 7.2% in October, which was the largest drop among states. Nationwide in October, the job openings rate was little changed at 6.9 percent. The Virginia quits rate (the number of ‘quits’ as a percentage of total employment) decreased to 2.7% and retreated from 2.9% in September. The U.S. quits rate decreased to 2.8 percent. October quits rates nationwide accelerated over-the-year in most production industries (mining and logging, construction, and nondurable manufacturing). Not surprisingly, leisure and hospitality may face continued retention problems as their quit rates rose when compared to before the Pandemic in February 2020. Lower rates of quitting may continue in many white collar industries (information, financial activities, and government) as quit rates decreased in those industries over-the-year and compared to before the Pandemic in February 2020. 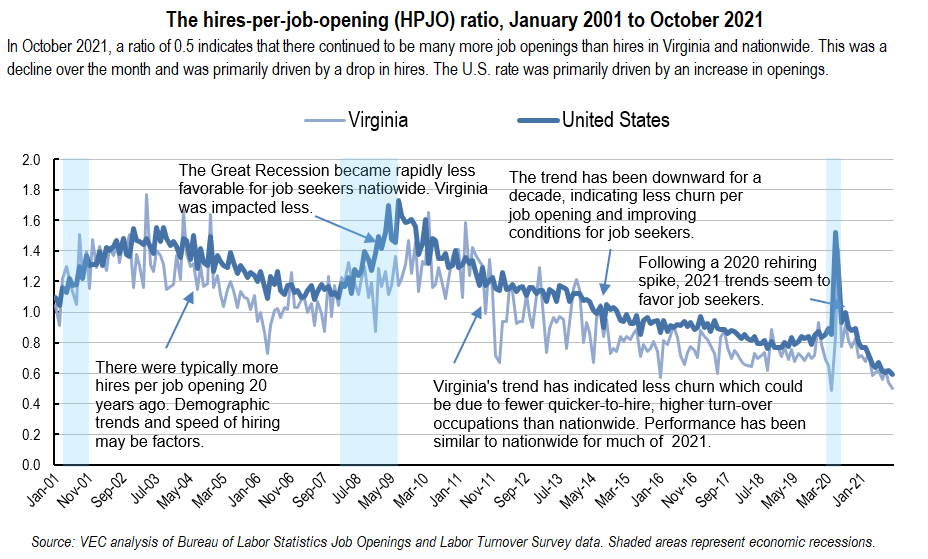 The hires-per-job-openings (HPJO) ratio fell to 0.5 in October in Virginia and was little changed at 0.6 nationwide. Virginia matched the series lows set in April 2020 and was driven by a decline in hires. This measure shows the rate of hiring compared to open jobs. It is a proxy for time to fill positions or the efficiency in filling open jobs in a labor market. 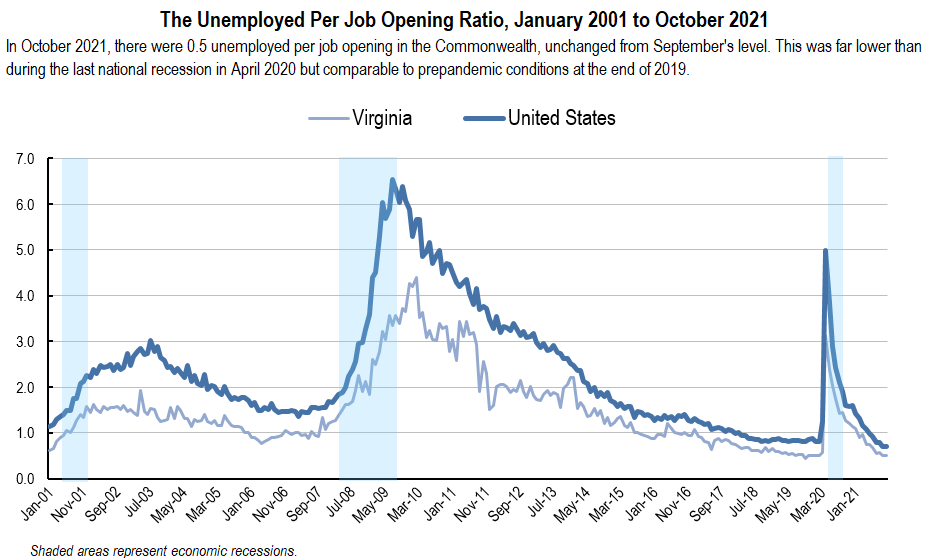 Most measures of Virginia job openings and labor turnover in October suggested some slow-down in labor market activity. The rate of hiring weakened significantly, perhaps impacted by the severe worker shortage in many parts of the state’s economy. The number of hires declined by 16% over the month to its lowest level since the beginning of this year. This while the number of job openings remained close to September’s historically high level. In such an environment, low numbers of layoffs in October may be another indication of employers’ efforts to hold onto scarce workers. The rate of job quitting may provide some positive news for employers as it receded slightly from historically high September levels.

The Virginia Employment Commission plans to release the November 2021 analysis of the BLS Job Openings and Labor Turnover Survey for Virginia on Thursday, January 27, 2022. The data for all states and U.S. will be available on the BLS website JOLTS page, at https://www.bls.gov/jlt/. BLS is scheduled to release the JOLTS data for states on Tuesday, January 25, 2021.