RICHMOND— According to the U.S. Bureau of Labor Statistics’ latest Job Openings and Labor Turnover Survey (JOLTS), in September 2021 there were a record-setting 328,000 Virginia job openings while the number of quits rose to 123,000; only 4,000 fewer than the April 2021 peak.

JOLTS data provides information on all pieces that go into the net change in the number of jobs. These components include job openings, hires, layoffs, voluntary quits, and other job separations (which includes retirements and worker deaths). Putting those components together reveals the overall change in payroll employment.

The number of hires in Virginia rose by 6,000 to 190,000 in September. JOLTS defines hires as all additions to the payroll during the month. The series low of 77,000 was set in April 2020, while the high of 265,000 was set in June of last year. Nationwide in September, the number of hires was little changed over the month at 6.5 million. Hires increased in health care and social assistance and finance and insurance and decreased in state and local government education and educational services. Like job openings, hires often increase during economic expansions and decrease during economic contractions.  Since the Great Recession of 2007-2009, JOLTS data indicates that the number of hires into positions has remained more constant than growth in job openings. 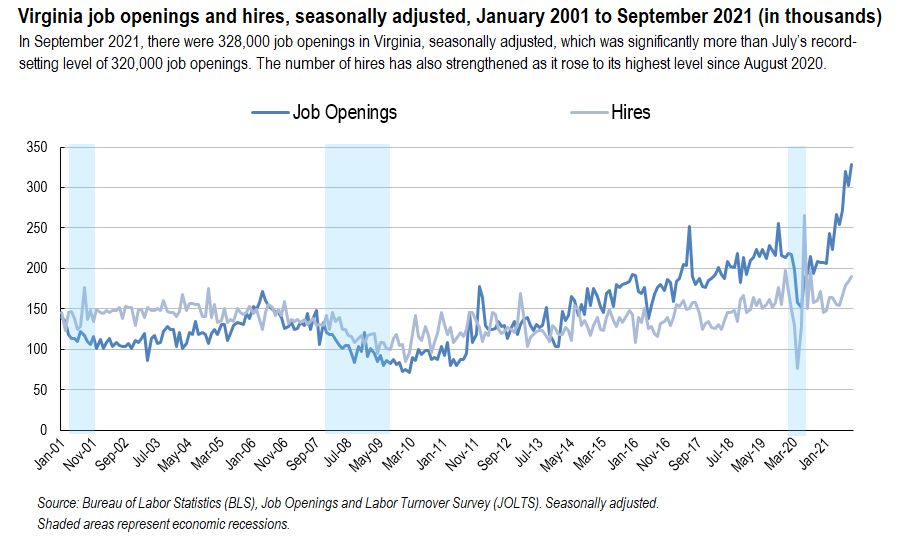 The number of quits in Virginia rose 12,000 to 123,000, the highest level since the record high set in April of this year. Quits, a component of total separations, are voluntary separations initiated by the employee. Like job openings, the number of quits typically rises when the economy expands as they may show employee confidence in the labor market. Conversely, during the height of the COVID-19 pandemic for example, employees were less willing to leave their current job for a new one. Nationwide, the number of quits rose to a series high of 4.4 million and increased in several industries including: arts, entertainment, and recreation; other services; and state and local government education.

Both the job openings rate and the quits rate remain highly elevated and indicate a positive environment for those looking for a job. The Virginia job openings rate (job openings as a percentage of total employment) rose to 7.7% in September, setting a new series high. Nationwide in September, the rate of job openings was little changed at 6.6 percent. The Virginia quits rate (the number of ‘quits’ as a percentage of total employment) increased to 3.1% and neared the series peak of 3.3% set in April 2021. Nationwide, the September quits rate increased to a series high of 3.0 percent while the layoffs and discharges rate was unchanged at 0.9 percent. 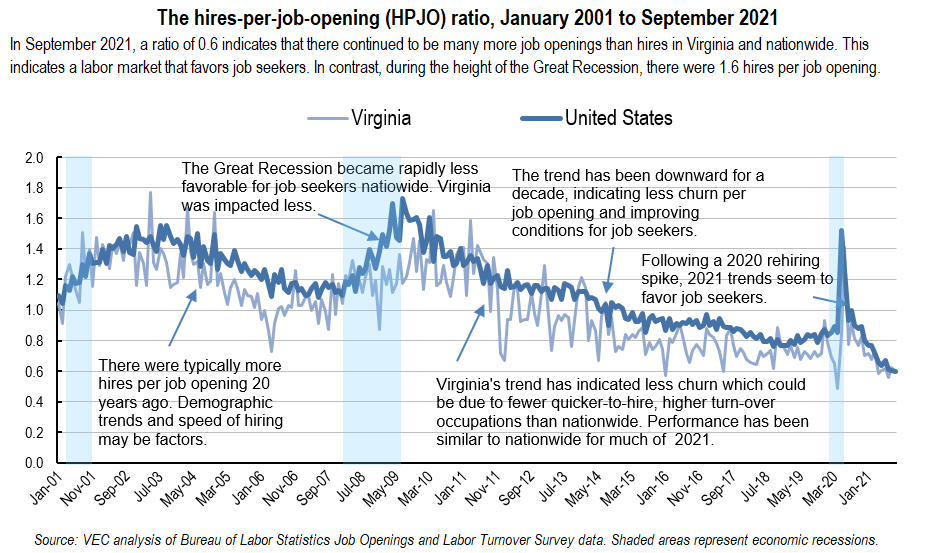 The hires-per-job-openings (HPJO) ratio stood at 0.6 in September in Virginia and nationwide. This measure shows the rate of hiring compared to open jobs. It is a proxy for time to fill positions or the efficiency in filling open jobs in a labor market. For most of JOLTS history, the number of hires has exceeded the number of job openings. However, since the end of the 2007–09 recession, job openings have increased at a faster pace, catching up with hires in 2014 and surpassing hires on a regular basis beginning in 2015. As a result, the hires-per-job-openings ratio at the total nonfarm-industry level decreased steadily since the end of the Great Recession. By January 2015, the hires-per-job-openings ratio was regularly below 1.0, indicating less efficiency in filling job openings. 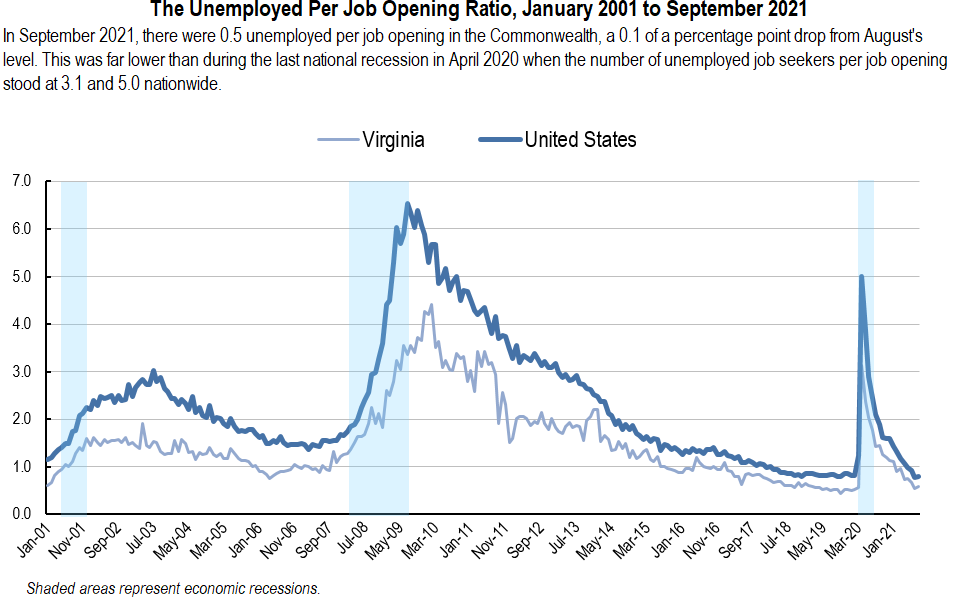 September’s JOLTS indicators suggest that Virginia employer demand for workers remained at highly elevated levels as the number of job openings reached their highest level in the past twenty years and the number of quits was also near record highs, indicating that labor markets remained in an unusual state of disequilibrium. At the same time, hiring ramped up in September in the Commonwealth which could indicate that progress has begun being made in alleviating the labor shortage that has been seen across the nation over the last year.

The Virginia Employment Commission plans to release the October 2021 analysis of the BLS Job Openings and Labor Turnover Survey for Virginia on Tuesday, December 21, 2021. The data for all states and U.S. will be available on the BLS website JOLTS page, at https://www.bls.gov/jlt/. BLS is scheduled to release the JOLTS data for states on Friday, December 17, 2021.