RICHMOND— According to VEC analysis of the U.S. Bureau of Labor Statistics’ latest Job Openings and Labor Turnover Survey (JOLTS), in August 2021 there were 289,000 job openings in Virginia, seasonally adjusted, which was a retreat from July’s record-setting level of 320,000 job openings.

JOLTS data provides information on all pieces that go into the net change in the number of jobs. These components include hires, layoffs, voluntary quits, and other job separations (which includes retirements and worker deaths). Putting those components together reveals the overall change in payroll employment.

Nationwide, recent industries leading in job opening growth have included: health care and social assistance; finance and insurance; and accommodation and food services. Since the Great Recession of 2007-2009, JOLTS data indicates that the number of job openings has greatly increased while the number of hires into positions has remained more constant.

Within separations, the number of quits in Virginia rose 14,000 to 112,000. Nationwide, the number of quits increased in August to 4.3 million and rose in: accommodation and food services; wholesale trade; and state and local government education. The number of layoffs and discharges in Virginia rose 10,000 to 37,000 but were 87% lower than the series high set at the start of Pandemic employment impacts in March of last year. 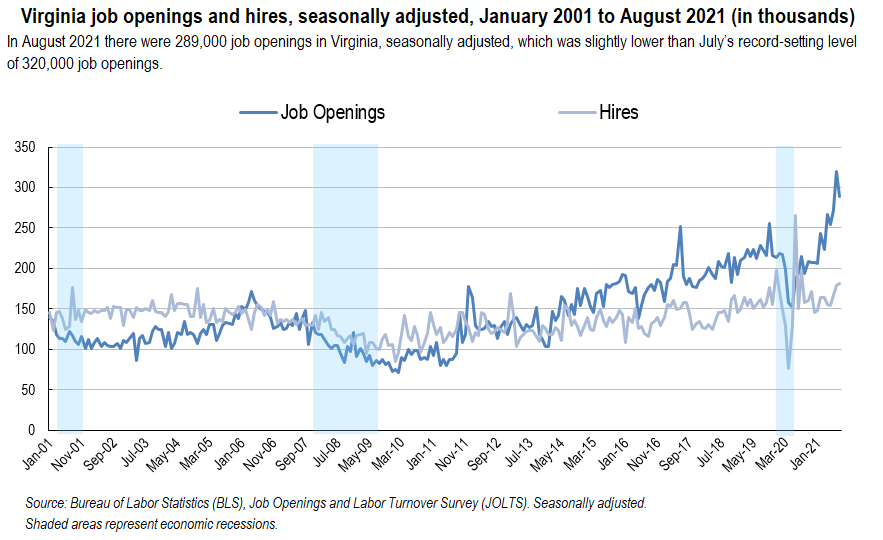 Both the job opening rate and the quits rate remain highly elevated and indicate a positive environment for those looking for a job. The Virginia job openings rate (job openings as a percentage of total employment) decreased to 6.9% in August, but was still not far off of the series high of 7.6% set a month before. Nationwide, in August, the rate of job openings decreased to 6.6 percent. The Virginia quits rate (the number of ‘quits’ as a percentage of total employment) increased to 2.9%. That measure peaked at 3.3% in April 2021 and was 2.8% during August 2019’s very strong labor market prior to the Pandemic recession. Nationwide, the August quits rate increased to a series high of 2.9 percent while the layoffs and discharges rate was little changed at 0.9 percent.

The hires-per-job-opening (HPJO) ratio stood at 0.6 in August and shows the rate of hiring compared to open jobs. It is a proxy for time to fill positions or the efficiency in filling open jobs in a labor market. For most of JOLTS history, the number of hires has exceeded the number of job openings. However, since the end of the 2007–09 recession, job openings have increased at a faster pace, catching up with hires in 2014 and surpassing hires on a regular basis beginning in 2015. As a result, the hires-per-job-opening ratio at the total nonfarm-industry level decreased steadily since the end of the Great Recession. By January 2015, the hires-per-job-opening ratio was regularly below 1.0, indicating less efficiency in filling job openings. 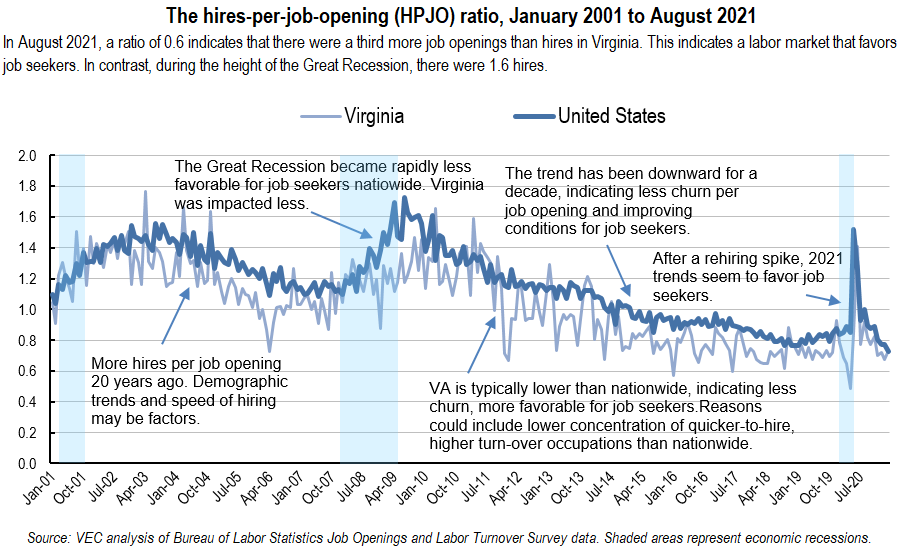 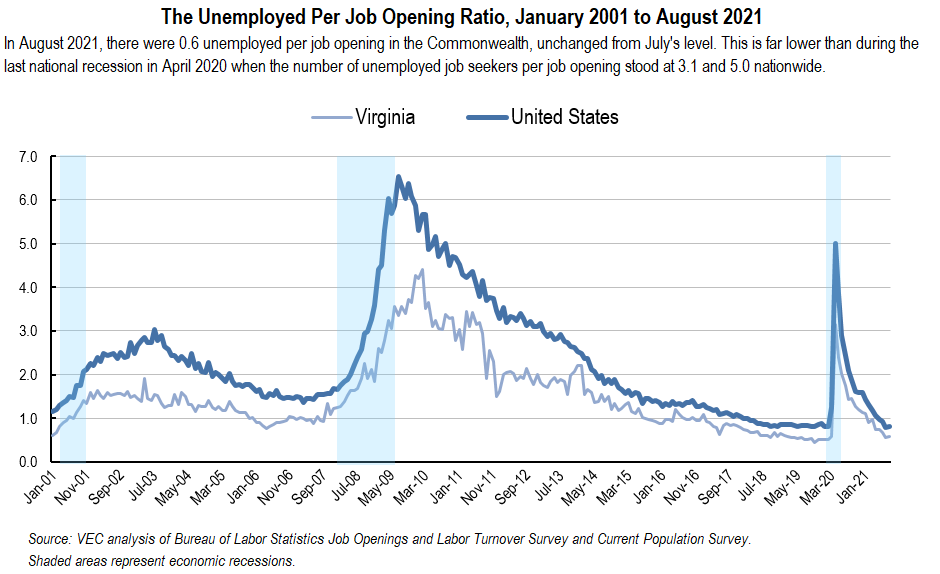 It is commonly believed that there are serious labor shortages in Virginia’s economy and nationwide, but these indicators suggest that their severity may have been underestimated and that slower than expected employment growth in recent months may have been constrained by worker recruitment and retention difficulties across many industries and regions.

The Virginia Employment Commission plans to release the September 2021 analysis of the BLS Job Openings and Labor Turnover Survey for Virginia on Tuesday, November 23, 2021. The data for all states and U.S. will be available on the BLS website JOLTS page, at https://www.bls.gov/jlt/. BLS plans to release the JOLTS data for states on the same day as the statewide unemployment rate and employment data for both the state and metropolitan areas are scheduled to be released on Friday, November 19, 2021.

Technical note: The Bureau of Labor Statistics (BLS) Job Opening and Labor Turnover Survey (JOLTS) produces monthly data on U.S. and regional job openings, hires, quits, layoffs and discharges, and other separations from a sample of approximately 21,000 establishments. As a supplement, BLS has begun publishing state estimates that provide monthly information that can be used to better understand the dynamic activity of businesses in state economies that leads to aggregate employment changes.