RICHMOND—The Virginia Employment Commission (VEC) announced that the total number of initial claims filed from mid-March through the May 16, 2020 filing week neared eighteen percent of pre-pandemic, nonfarm employment, according to figures released today.

For the filing week ending May 16, the figure for seasonally unadjusted initial claims in Virginia was 44,699. The latest claims figure was a decrease of 7,440 claimants from the previous week. The weekly total was the lowest since before the initial spike in unemployment insurance claims during the March 21 filing week.

According to preliminary figures from the May 16 filing week, the accommodation and food service sector, which includes hotels and restaurants, continued to see the greatest percentage of continued claims for unemployment benefits (92,688 of those reporting). This reflects impacts of public health and safety measures related to the COVID-19 pandemic. Moreover, claimants in that industry comprised over a quarter of pre-pandemic payroll employment. Many continued claims also came from workers in retail trade (14% of industry employment) and health care and social assistance (9% of industry employment) during the week of May 16. 28,543 claimants work in small service businesses like barbershops and automotive repair shops, which are classified in the other services industry. 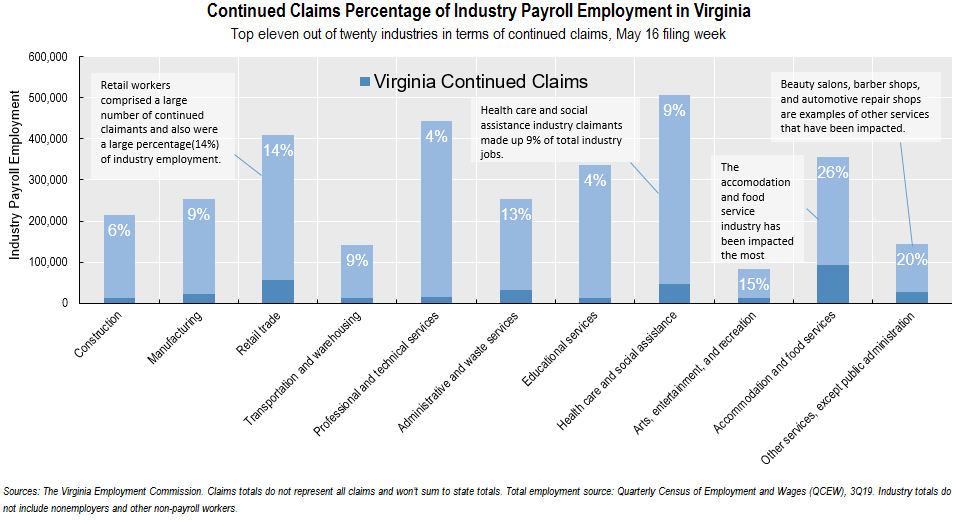 Nationwide, the number of seasonally adjusted initial claims totaled 2,438,000, a decrease of 249,000 from the previous week's revised level. The previous week's level was revised down by 294,000 from 2,981,000 to 2,687,000. The advance number of actual initial claims under state programs, unadjusted, totaled 2,174,329 in the week ending May 16, a decrease of 182,265 (or -7.7 percent) from the previous week. In addition, for the week ending May 16, 35 states reported 2,226,921 initial claims for Pandemic Unemployment Assistance. Most states showed decreases in the most recent week. While twelve reported weekly increases, nine of those were under 1,000. Looking at advance-issue, seasonally unadjusted numbers, the top three increases in initial claims for the week ending May 16 were in Washington (+34,397), California (+33,448), and New York (+27,102). Virginia’s weekly change was the 14th largest decline among states. 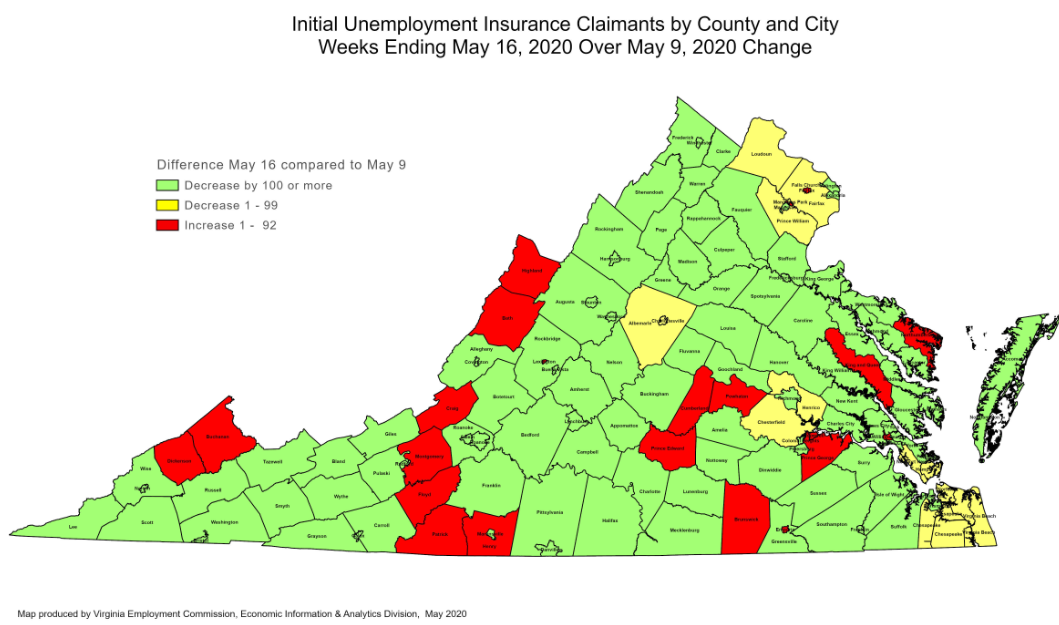 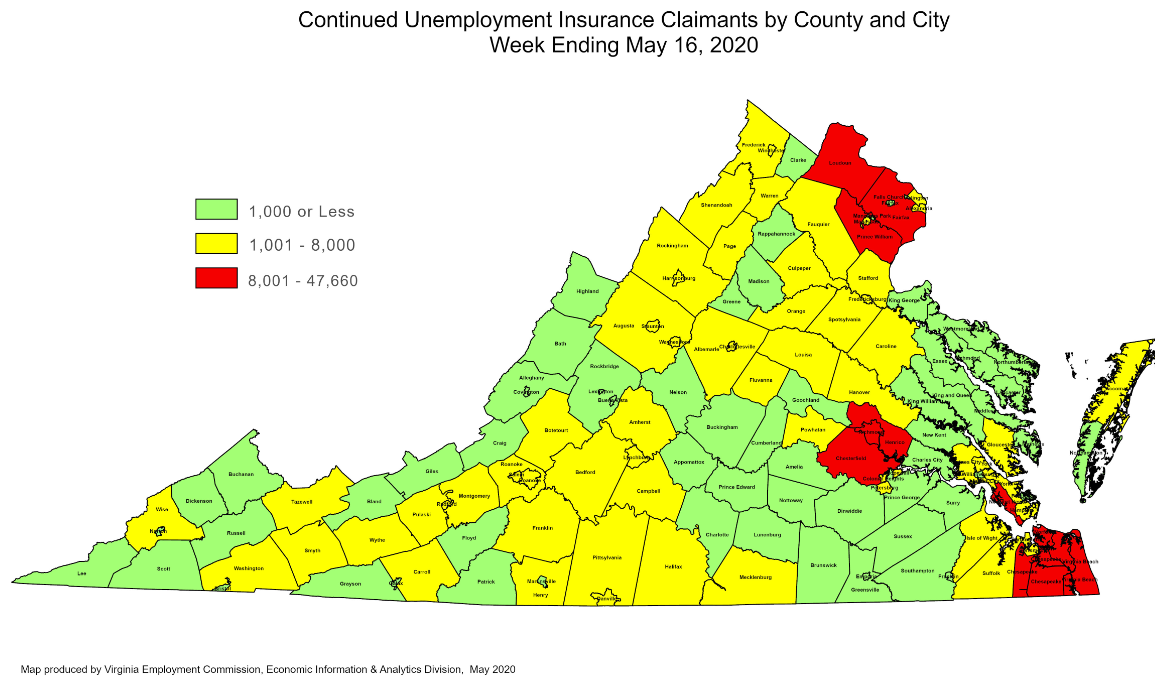 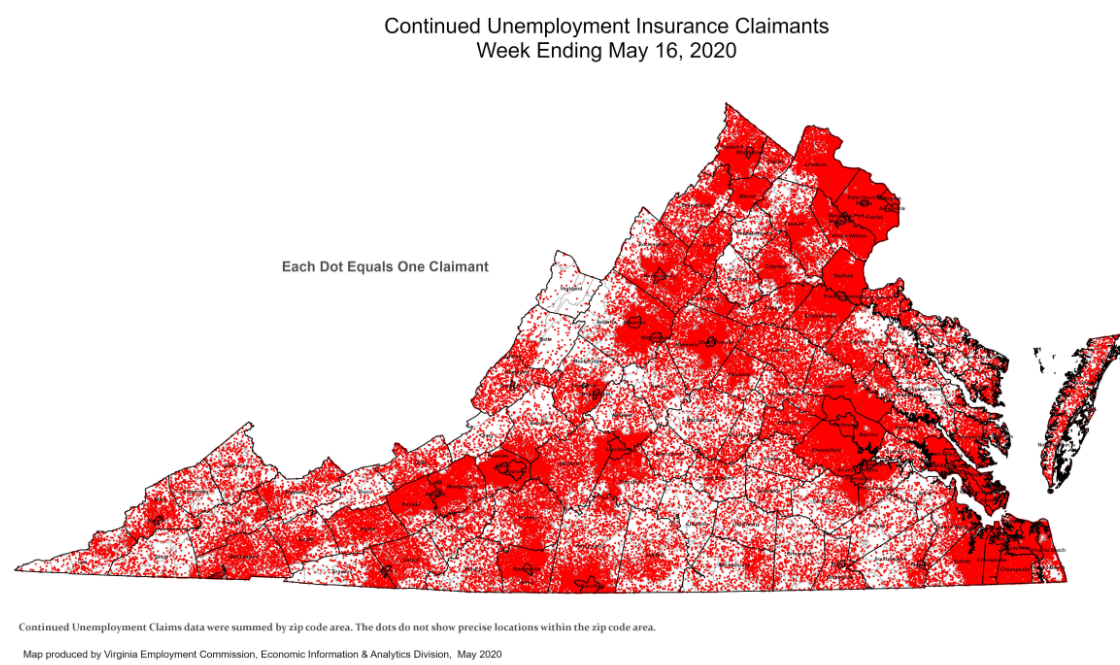